The 2012 financials for SolidWorks...

The 2012 financials for SolidWorks indicate continued growth and momentum

Many SolidWorks users are keenly interested in the goings on of the company and where the software may be going both in the way of further development and new direction.  To gain a sense of the current business health of SolidWorks, it might be helpful to look at the company as it has grown over the years and what the current Dassault Systemes 2012 financials reveal*.  In summary, most will find that SolidWorks is, well... very solid.

A brief review of the history of SolidWorks shows continued growth both from within and from acquisition.

As regards SolidWorks licenses, a notable statistic that stands out is the ever growing percentage of education license sales over commercial, currently at a 2.8:1 ratio. 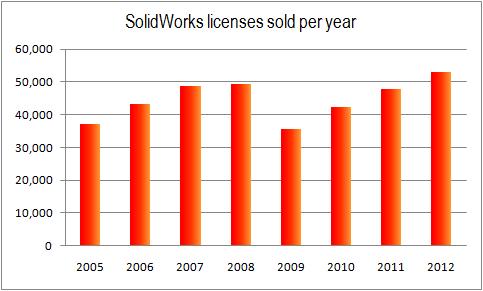 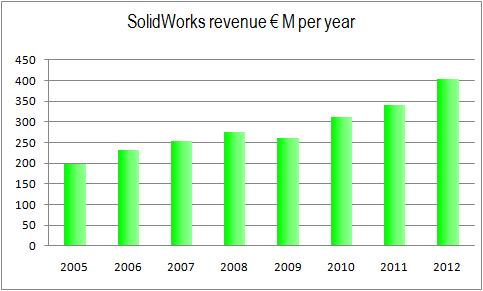 What has changed is the profitability.  Whereas SolidWorks sales generally mirror the overall economic trends, the revenue generated by SolidWorks is showing a steady increase.

An clearer indication of momentum within SolidWorks is the employee headcount.  While it has shown moderate increase over the years, in 2012 it jumped significantly from 848 to 1,015.  One can only speculate as to what all that extra effort is going toward, but SolidWorks Mechanical Conceptual would seem to be at least one reasonable choice.

In conclusion, the statistics indicate that SolidWorks continues to provide a viable tool that CAD consumers appreciate.  Certainly, as technology and leadership shape SolidWorks from within, it seems well positioned within the framework of Dassault Systemes 3DEXPERIENCE Platform to continue pressing diligently toward their goal.  A goal of gaining an ever increasing share as the CAD software of choice among the worldwide design community.